The 2020 Apostle Islands night ice cave tours will take place at the Houghton Point ice caves in Chequamegon Bay.  The total round trip walk is 4 miles on a well groomed trail with headlamps provided by us.

The ice in Chequamegon Bay is thicker and forms sooner than anywhere else in the Apostle Islands. We use the same ice thickness standards as the National Park Service and require 10″ of ice before we begin.  If the ice gets thick enough we may offer an ice cave tour to Romans Point.  Romans Point is on the same side of the peninsula as Meyers Beach, where conditions are more unpredictable and it is unknown if they will open on any given year.  The last time any ice caves were open on the West side of the Bayfield peninsula was 2015 for about a 2 week period.  The Houghton Point Ice Caves are in Chequamegon Bay on the East side of the Bayfield peninsula where the ice is much thicker and conditions are more predictable.   You can count on the Houghton Point Ice Caves opening in late January or early February and ending in March.

When you sign up for an ice cave tour you will have a guide with you that is briefed on the ice conditions and ice thickness for that day.  They will show you where all the best ice caves are and where to find the most intricate and massive ice formations.  While you are on a tour you are welcome to do your own exploring or abbreviate your adventure but if you are doing your own exploring you must stay behind the guide.  The guide will determine the furthest distance that the group can travel for any given day, but if the conditions are good it is around a 4 mile round trip tour.

–  Advice for bringing children to the ice caves

If your tour is cancelled due to weather conditions you will have the option to reschedule or take a 100% refund.
If you cancel your reservation less than 24 hours before the start of the tour there are no refunds. 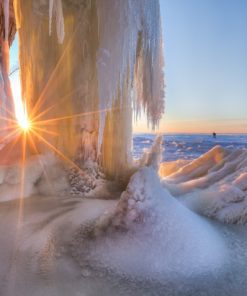